june 9, 2005
kansas tornadofest
Waking up in Dodge City this morning, I was encouraged to see strong surface and low level southeast winds feeding moisture into the region. The plan today was going to be to head up towards northwestern Kansas along the warm front. I went north to WaKeeney to listen to the weather radio for a while, and by plotting obs saw that there was a warm front/outflow boundary intersection somewhere in the vicinity of Hill City. Around 2:30pm storms rapidly began firing around Hill City, so I raced north in that direction. From Hill City I went west a few miles to watch a storm to my west-southwest as it produced a wall cloud which got wrapped up in rain. I then went back to Hill City to stay ahead of the precip core where I saw another wall cloud to my west-southwest at 3:59pm 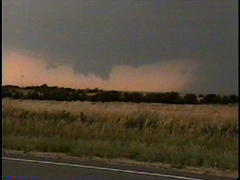 By around 4:15 the wall cloud had gotten much larger and lower to the ground 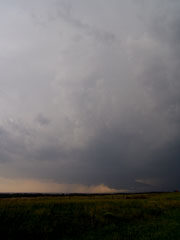 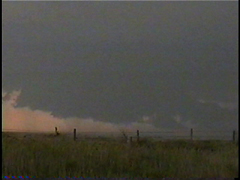 As I continued east to stay ahead of the precip, I looked back to my west-southwest at 4:22pm and saw a large stovepipe tornado in progress. I quickly pulled over and rushed out of my car to get video. By the time I was able to get my tripod set up rain curtains were rapidly wrapping around the tornado, dimming my view of it. Here are a few very faint captures I was able to get of the tornado before I lost sight of it.

One thing the rain didn't obscure was an impressive inflow band which fed into the tornado from the north-northeast.

After being delayed briefly by construction workers who were still out doing work on the road despite lightning striking nearby, small hail falling, and a large rain wrapped tornado heading in their general direction - I went east to Stockton, then went south on US 183. A few miles south of Stockton I was able to get a good view of the storm again, and at around 5:35 began to make out another large stovepipe tornado occurring in front of a precip curtain. After pulling over and getting out of the car I noticed ANOTHER truncated cone tornado was simultaneously in progress just to its north. Contrast was not very good so I put numbers beneath each tornado on the following capture. 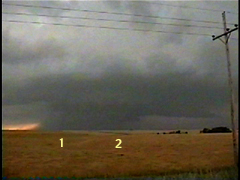 Now I was faced with the dilemma all chasers dream about, which tornado do I put the viewfinder on? Since the stovepipe to the south had slightly better contrast, I chose to video this one first. Again, contrast isn't the best but you should be able to make it out in front of the rain curtain.


I wasn't able to get too many digital images since I was mostly focusing on video, but here's one I did get....

Here's the one high contrast video capture I was able to get when the tornado was backlit by lightning.... 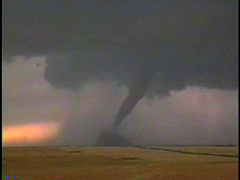 After that tornado roped out, I put my viewfinder on the tornado to its north, which had become quite large. Contrast was very poor so I put in arrows pointing to the tornado.

I ended up losing sight of this tornado in the rain. After this I decided to move on to another storm to its southwest. I went west of Hays on I-70 where I caught sight of this amazing storm structure. I wasn't able to see any tornadoes out of this storm, although I imagine that it probably did produce one (or more) while I was looking at it.

Lightning was quite impressive with this storm as well.


The storms then got undercut by cold air and met their demise. But not before producing a nice display of mammatus.

With the show clearly over for the day I stopped in Hays and was in my hotel room by 8:30pm.

Go on to the next page.